Skip to content
book a meeting with the chicken chick©! schedule now
5 Tips for a Cleaner Coop with Less Effort

It’s that time of year when I do a major coop cleaning and this year, it’s an easier task than ever before due to a few simple modifications that were made in our coops. Not only is it faster to complete the semi-annual ‘deep cleanings,’ but I find that I am able to keep the coops cleaner in between deep cleanings by employing these five elements: droppings boards, removable roosts, a dedicated coop duster, sand and vinegar.

Droppings boards are essentially shelves designed to collect chicken poop deposited overnight. Backyard chickens spend most of their waking hours outside the coop, either ranging freely outside the run or wandering around inside an enclosed run, which means that droppings inside the coop accumulate primarily overnight underneath the roosts. Utilizing droppings boards to collect those droppings is a simple and effective method
for keeping the coop largely poop-free.

Beyond coop sanitation, droppings boards provide a daily opportunity to assess the health and well-being of the flock. I am able to see plainly whether a chicken has been injured in a scuffle overnight, has contracted coccidiosis, worms or diarrhea. Without droppings boards, most of that evidence would be hidden in the bedding, denying the chicken-keeper the opportunity to detect and treat certain health problems as early as possible.

These roosts were removed with a sledgehammer.  The 2 x 4s were inserted into joist hangers:

When we purchased our first coop, it came with roosts permanently affixed to the walls. When we decided to install droppings boards, the roosts needed to be raised in order for the droppings boards to fit underneath. When reinstalling the roosts, my husband affixed joist hangers, which the 2-by-4s fit into, which made the roosts removable for cleaning. I find that removable roosts are much easier to scrub vigorously and thoroughly if they are on the ground outside the coop. It is also much easier to access the areas behind and underneath the roosts when they are out of the way. I tend to clean the removable roosts more frequently than I would stationary roosts because the task is so much easier.

Sand as litter in the chicken coop looks cleaner than other litter option and is cleaner! In scientific studies done by the Auburn University Department of Poultry Science, sand performed better than pine shavings with lower bacterial counts, lower fungal populations and lower moisture levels. The Auburn study states, “Sand, being inorganic, contains few nutrients that could be utilized by bacteria and, thus, would tend to lead to lower bacterial numbers.” “Additionally, sand may lack binding sites for bacteria.” Coliform counts, including E.coli, were found be significantly lower in sand than in wood shavings. Sand costs a fraction of the price of any other litter material and keeps the coop cleaner with less effort! Like the droppings boards, sand is attended to once daily, which takes only minutes to achieve a clean, dry environment for my flock, which is healthier for them.

Staple empty feed bags onto the walls behind the roosts. It’s much easier to replace soiled feed bags than it is to scrape chicken poop off the walls!

The harsh reality of housekeeping in chicken coops is that they are perpetually dusty. Regardless of the litter choice, it generates dust. In fact, chickens themselves are especially dusty. If you have ever raised baby chicks inside the house in a brooder, you know this to be true.

To keep the dust to a manageable level, I keep a duster inside the chicken coop. Whenever I have a moment to spare, I give the walls, nest box curtains, window dressings and feedbag artwork a quick dusting, which makes the semi-annual cleaning a much less tedious undertaking. 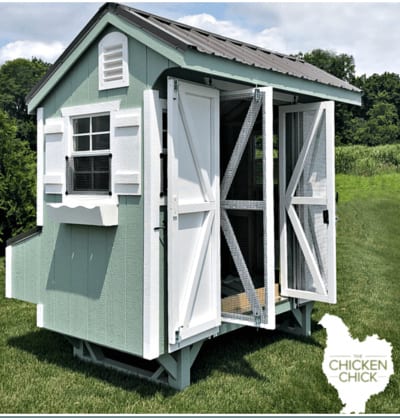 What is that white stuf you use on your perch pace for your chickens. Plus what do you use in your nesting boxes.

These are the plastic nest pads I use: https://amzn.to/2wWx6au
Why Nesting Material Matters: http://bit.ly/2QaI57Q

Great tips! Thank you. We have a roost over a sandbox, but I’ve never thought of a droopings board in the coop. I’ll get right to that. Great point about assessing their health.

Is there somewhere on your site that you list your daily, weekly, monthly, bi-annual, and annual coop cleaning chores?

In my book there is. https://amzn.to/2Jxom0Z

Does the sand in the coop chickens as warm as other types of bedding such as pine shavings?

Chicken litter is NOT for the purpose of providing chickens with warmth. Chickens keep themselves warm in a dry, draft-free chicken coop in winter. Chicken litter is designed to keep their living space DRY and facilitate cleaning. Please read this: https://the-chicken-chick.com/chicken-coop-bedding-sand-litter/